Yvonne is a NASA Astronaut, a Family Physician, a Retired Senior Flight Surgeon for the USAF, a motivational speaker and inventor! She will be a leading keynote speaker at our Pivot Towards Your Purpose event in Sept. 2018. Learn more about her below… 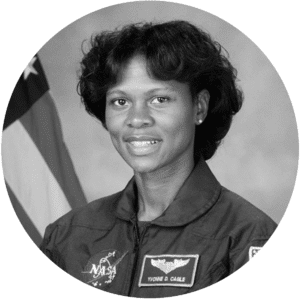 Born in West Point, New York, Yvonne Cagle graduated from Novato High School in Novato, California.[1] She received her bachelor’s degree in biochemistry from San Francisco State University in 1981, and a doctor of medicine degree from the University of Washington in 1985. She completed a transitional internship at Highland General Hospital in Oakland, California in 1985 and received a certificate in Aerospace Medicine from the School of Aerospace Medicine at Brooks Air Force Base, Texas, in 1988. She then went on to complete a residency in family practice at Ghent FP at Eastern Virginia Medical School in 1992 and received certification as a senior aviation medical examiner from the Federal Aviation Administration in 1995.

Cagle retired from the United States Air Force with the rank of Colonel in 2008.[2][3] In May of 1989 as a commissioned medical officer assigned to the 48th Tactical Hospital, United Kingdom, Cagle served as Air Force Medical Liaison Officer for STS-30 mission to test the Magellan spacecraft, before she became a NASA astronaut.[3] She worked as medical doctor at NASA’s Occupational Health Clinic from 1994 to 1996.[3] In 1996 she was selected for astronaut training by NASA.[3] 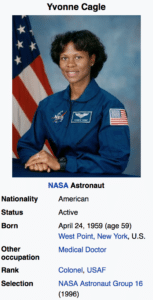 Yvonne Cagle was a member of the Astronaut Class of 1996 (NASA Astronaut Group 16). She is currently assigned to Johnson Space Center’s Space and Life Sciences Directorate.[4]

Cagle is also an advisor for NASA’s Flight Opportunities Program (originally named CRuSR – Commercial Reusable Suborbital Research Program).[5] Currently Dr. Cagle is on faculty and serves as the NASA liaison for exploration and space development with Singularity University. During the workshop, Dr. Cagle was embedded with the crew as a crew training consultant and advisor, providing insights and feedback to both crew and study team from the viewpoint of an astronaut, flight surgeon, space development expert, and science liaison.

She has recently been selected reserve crew for Hawai‘i Space Exploration Analog and Simulation (HI-SEAS), which is part of a study for NASA to determine the best way to keep astronauts well nourished during multiple-year missions to Mars or the moon.[6] Furthermore, Dr. Cagle is also listed as an honorary member of the Danish Astronautical Society.[7]

In 2014, Cagle was a visiting professor to Fordham University where she was participating in interdisciplinary research in health, environment and human Performance.[8] She was awarded an honorary Ph.D. by Fordham University for her substantial and significant contributions to the fields of science, technology and human health.[9]

As of June 2018, Cagle is considered a “NASA Management Astronaut”, which means that she is employed at NASA but are no longer eligible for spaceflight assignments.[10]

To book Yvonne as a live event, conference or motivational speaker please use this contact form.